Non invasive analyses of thangkas, a scientific contribution to the history of Tibetan thangkas 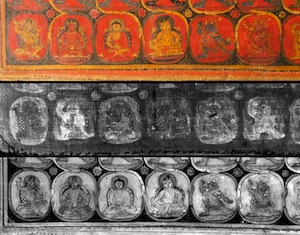 In Tibetan, thang ka literally means ‘flat surface’, in the sense of ‘portrait’ (zhel thang) or the depiction of a divinity (thang sku or sku thang). In an simplified sense, a thangka is a devotional image characteristic of Tibetan Buddhism used in meditation, in prayer, and in religious ceremonies. In general, thangkas are paintings executed on a canvas support that is primed on both sides. The nature of these works requires that they be executed following a strict protocol directly involving the individuals who commissioned the work, usually part of the religious community.

Over past decades, results of some of the studies on the painting techniques and materials used in making a thangka have been published. These studies most often address types of pigments and binders, and examine a single work or a restricted number of works in museum collections. In terms of fabrication procedures, the extensive collection of thangkas in the Museo Nazionale d’Arte Orientale ‘Giuseppe Tucci’ in Rome had never been the subject of study. During the 1990s Museum management, with the support of Prof. Deborah Klimburg-Salter of the Department of Art History of Vienna University, initiated a conservation project that made it possible to undertake a systematic study on a fairly broad number of works. Eventually, with the help of different investigative techniques and cross-referenced comparison of the results, the study has attempted to further knowledge about pictorial technique, not only in regard to materials used but also to the methods employed in applying the materials to create the final image. In some cases, the systematic step-by-step procedures used by the painter could even be hypothesised. One of the most recent puzzles, for example, was the interpretation of various markings, generally consisting of alphabetical characters, used as indications for the colours on the underdrawing and useful for the subsequent application of the paint layers.

The English translation of the book: Dipinti Tibetani dalle spedizioni di Giuseppe Tucci – Materiali e tecniche alla luce delle indagini non invasive (Rome 2008, edited by Marisa Laurenzi Tabasso, Claudio Seccaroni and the present lecturer, Massimiliano A. Polichetti), which contains the results of the long series of studies made on a group of works belonging to the MNAO collections, is now near to its completion. In many sections of this forthcoming volume, the new version has been expanded and provides updated information with respect to the Italian version. The English version, therefore, can be considered a new contribution with respect to the original text. The differentiation between the two texts is purposely underscored even in the new title, Visibilia invisibilium (“visible representations of the invisible”). The analyses carried out on the sacred Tibetan icons, essentially ‘rendering the invisible visible’, brought to light extensive amounts of graphic and iconographic data that had been hidden from view, and thus, deserving of such a learned definition. Support from the Institut für Konservierung und Restaurierung dell’Universität für angewandte Kunst in Vienna and the Danon publishing house have made the English edition of the publication possible, which is aimed at making the results of the study available to a broad public.

The competencies involved in this volume have been diversified and many. The presentation of the various topics underscores the collaborative and integrative efforts at avoiding specialisms and convoluted use of language, which would diminish the readability and comprehension by those outside the field of conservation science or those unacquainted with Tibetan Buddhism. The team that carried out the analyses are from some of the most well-known Italian institutions working in the field of cultural heritage: ENEA (Italian National Agency for New Technologies, Energy and Sustainable Economic Development), OPD (Opificio delle Pietre Dure), CNR-INOA (National Research Council-National Institute of Optics), ICCROM (International Centre for the Preservation and Restoration of Cultural Property), and ISCR (Istituto Superiore per la Conservazione e il Restauro, former ICR, Istituto Centrale del Restauro).

The diagnostic approach was strictly limited to non-destructive analytical techniques, and use of these techniques on cultural heritage in Italy has a long history. Non-destructive techniques of analysis were used exclusively because of the conditions of the works; respect for the integrity of the piece was moreover much appreciated by the Tibetans aware of the project – laymen and monks alike – because of their religious beliefs.

All the above-mentioned institutions have long been recognized internationally for excellence. With this framework, for those who usually work with western art it was possible to effectively enter unaccustomed territory, testament to the proficiency and maturity the team of experts and the synergy among all the partners.

The extensive research on the paintings published in this volume has enabled innovative exploration in a field that is still relatively unknown in the West except on a specialized level. It contributes to the understanding of pictorial techniques, the characterisation and the passage of materials that can expand the knowledge and understanding of Tibetan painting on an international level. A major factor in this contribution is the uniqueness and extraordinary qualities of the paintings that were studied and brought to Europe by Giuseppe Tucci as part of his scientific expeditions in Tibet and the rest of the Himalayan region.

European Society for the Study of Central Asian and Himalayan Civilisations